Our immune system – the battle within

If we could travel inside our body, shrinking down to a cellular level, we could see how amazing our immune system really is.

…the start of the immune response

When looking for new treatments for human disease, one possible strategy is to use observations made in the clinic and work back to the cellular causes. In the Davis and Cornall labs, we follow the opposite strategy – we  seek new treatments for human disease by first trying to understand how healthy cells function, focusing on the processes most likely to impact on disease.

As our video “The immune system – the battle within” shows, there is no process more interesting to investigate than the immune system (or at least we think so!). The immune system is the defence mechanism within our bodies – it normally protects us from foreign pathogens and other threats such as cancer but it is also the root cause of many debilitating diseases, such as diabetes and rheumatoid arthritis. 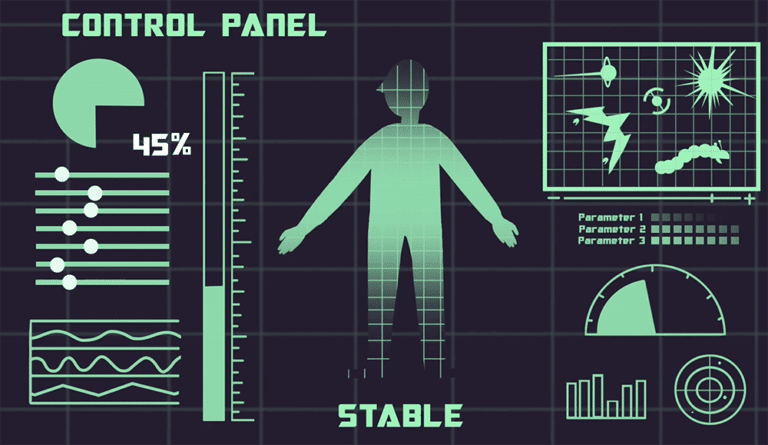 As our animation shows, the immune system is incredibly complex, and trying to understand what each component does, and how they all work and fit together, is a question that has interested scientists for many years.

The way the immune system reacts to a foreign pathogen or some other threat is known as an immune response. For the most part, immune responses are nicely explained by a scientific theory called the Clonal Selection Hypothesis, which was first sketched out by a famous Australian scientist out of Melbourne, called Sir Frank Macfarlane Burnet. According to Burnet’s idea, immune cells, that is the white blood cells referred to as B cells and T cells in our video, all differ in their ability to react to pathogens or to tumours. In a process that’s a lot like Darwinian selection but on a tiny scale, the pathogens and tumours select out those individual cells best able to deal with the threat. They do this by causing these rare cells to multiply as clones, so that there’s enough of the right types of immune cells to get the job done.

Even before this idea had emerged back in ‘59, however, Burnet had already realized that immune cells must only start multiplying when they are activated by pathogens via a very specific ‘trigger’ mechanism. We now know that this triggering process relies, in the very first instance, on a singular event. Immune cells have proteins on their surfaces called receptors. When an immune cell of the right type encounters a pathogen or a tumour, these receptors are chemically modified, which tells the immune cell that a threat has been recognized. Remarkably, sixty years on, this is all we know about Burnet’s trigger mechanism: we still don’t understand how the receptor is chemically modified and so we don’t actually know how the immune response starts. And this is where we come in. 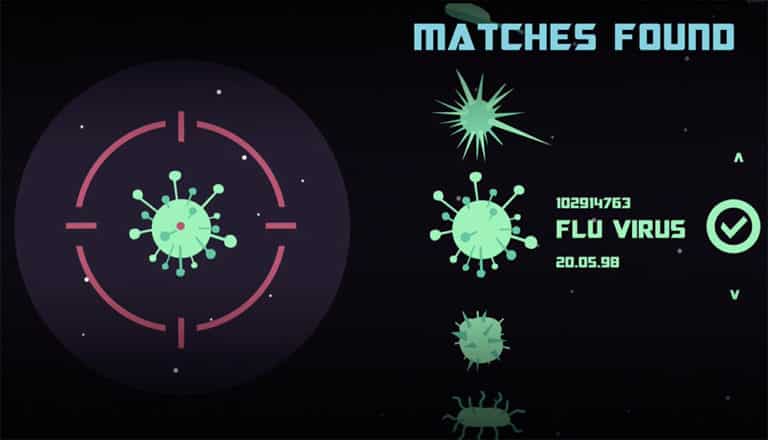 Our theory: when cells collide

We now have our own theory (scientists love a theory), which we proposed back in ’96. A little unhelpfully, it is called the ‘kinetic-segregation’ model, but it is really quite a simple idea. 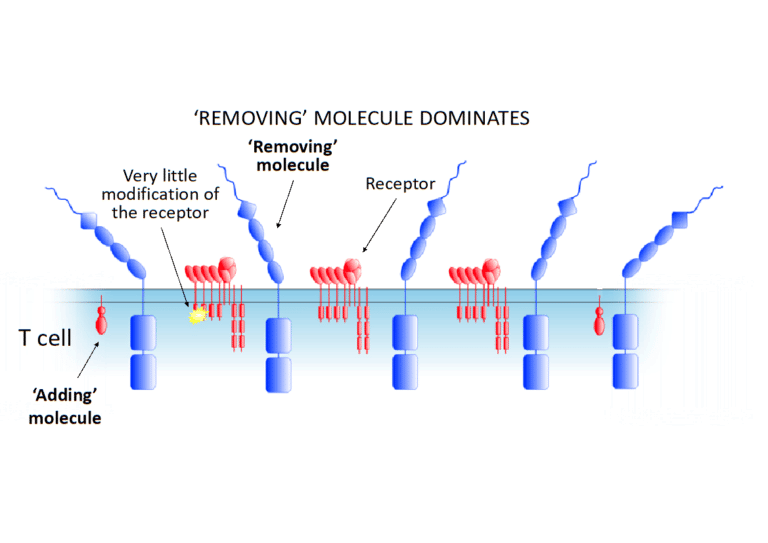 All this changes, however, when the immune cell encounters an infected cell or tumour. When it is close to one of these other cells, things start getting a bit tight close to the surface of the immune cell. As it happens, the ‘removing molecules’ are actually quite large molecules, so they start being squeezed out of the space between the cells. The ‘adding molecules’, however, stay where they are. This is shown in the next image. This tips the balance – now there are more chemical modifications being added to the receptors than are being removed – and this triggers the immune cell, inducing it first to multiply as a clone and then to fight the intruder. 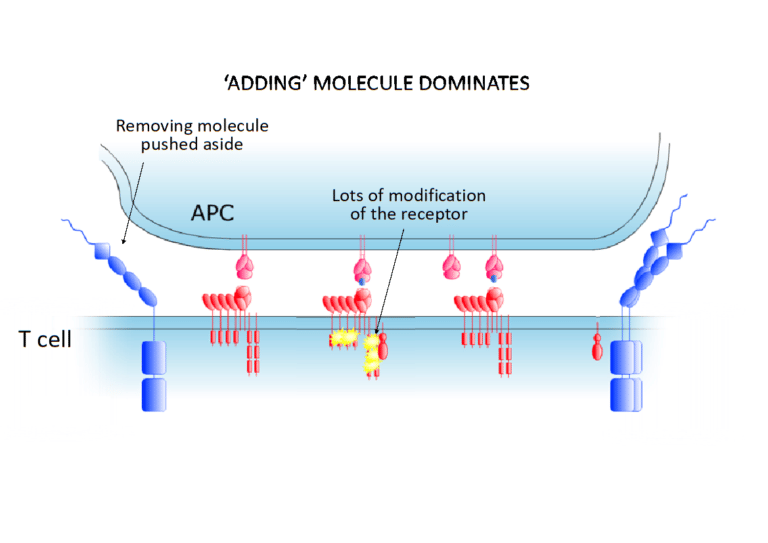 A short FLASH animation showing how our theory works…

In this animation, the receptors we are discussing here are called T-cell receptors (because they are on T cells). The ‘adding molecules’ are enzymes known as kinases (in this instance Lck) and the ‘removing molecules’ are  phosphatases (in this case CD45). The chemical modification we have mentioned is called here by its precise name: phosphorylation (addition of a group of phosphorus and oxygen atoms).

We think this is a nice idea because, at least in principle it seems to solve a sixty year-old mystery and because it suggests a wholly new way in which cell behaviour is changed. It is also very simple; and, although it is not the only proposed mechanism, we and others have accumulated a lot of experimental evidence in favour of our theory, data we have obtained mostly using microscopy with the help of colleagues at Cambridge University.

Another of the reasons why we like this idea is that it might be useful, even in the clinic!

In our video, you will have heard about antibodies, which are produced by B cells. It turns out that, because they can be made to bind to receptors, they make useful drugs. Using them to manipulate the immune system is already producing enormous dividends, especially for the treatment of cancer, as we also try to emphasize in our video. But we now think that it might be possible to develop new antibody-based drugs that could be used to favourably influence the ‘go/no-go’ decisions that immune cells make, by also altering the space between cells and changing how the receptors are chemically modified. How these antibodies achieve this is shown in a second FLASH animation, which can be found by clicking here to visit our website. Here at the Davis and Cornall labs we’re hopeful that such antibodies will one day benefit patients in the clinic.

More about our science can be found on our research web pages: