Your beautiful, complex brain is a network of microscopic cells that connect together to form your thoughts and personality, and control your body. The network is fragile and requires constant upkeep, like a garden. The brain has its own gardeners, specialised cells called microglia. In this animation we look at how researchers at the University of Oxford are developing drug treatments for Alzheimer’s disease, by harnessing the power of the brain’s microglia.

People often complain of forgetfulness when they get older. However, a person with dementia experiences profound and worsening memory loss, and difficulties with thinking, problem-solving or language. Dementia is caused by loss of brain cells through disease, leaving the brain up to 140 grams smaller, which is about the weight of an orange (1). 1 in 3 people born in the UK this year will develop dementia in their lifetime, and the most common cause is Alzheimer’s disease (2,3).

Scientists understand that Alzheimer’s disease may be caused by malfunctioning proteins called beta-amyloid and tau, which are constantly made by brain cells all through your life. Amyloid and tau like to stick together in toxic clumps, so levels have to be carefully controlled. In healthy people the malfunctioning protein is carefully destroyed by several routes, inside and outside of cells. In Alzheimer’s disease, the protein waste is not removed efficiently so causes damage to nerve cells, and weakens the connections between nerve cells. Since all of your thought processes and memories originate as electrical impulses passed along chains of nerve cells, which are like the ‘wires’ in a very complex computer, information has to be re-routed around broken connections, and can get muddled or lost. This disruption of the networks and the messages they send is what underlies symptoms, which get worse over time as more cells and networks become affected.

Microglia: the gardeners of the brain

The brain does not passively accumulate toxic clumps of beta-amyloid and tau, it fights back. A type of cell called ‘microglia’ is constantly on the look-out for protein clumps. Microglia are restless, busy gardeners that carefully tend networks of nerve cells, each patrolling their own patch. They quickly clean up any dying cells or protein waste, which they ‘eat’ and ‘digest’, in a process called phagocytosis. Unfortunately, in Alzheimer’s disease the microglia are unable to clean up all of the protein waste that is expelled from other cells, and the malfunctioning proteins are able to clump together. Microglia may even increase the rate of nerve cell death in the brain, because they see the amyloid as a threat and mount an immune response against it. Microglia are part of your immune system, thus have various ‘weapons’ to use against foreign invaders, but in Alzheimer’s disease their heightened activity causes collateral damage to your nerve cells. This is called neuro-inflammation: a persistent state of inflammation in the brain. 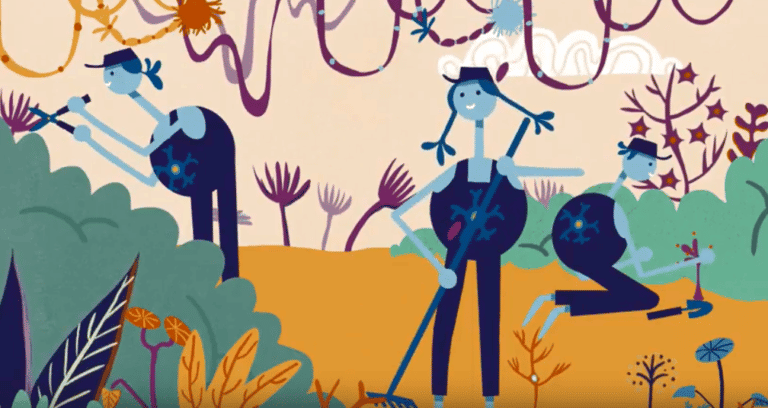 Can we do anything about it?

Currently there are no drugs to treat the underlying causes of Alzheimer’s disease. The charity Alzheimer’s Research UK (ARUK) has established drug discovery research institutes to try to accelerate the development of new treatments. At the ARUK Oxford Drug Discovery Institute (ARUK ODDI), we act as a ‘hub’ for Alzheimer’s drug discovery research, by collaborating with laboratories from several departments across the University of Oxford, other universities, and industrial partners.  Together we are trying to find new ways to tackle Alzheimer’s, and are concentrating particularly on how to control microglia, encourage their waste disposal efforts and lessen the damaging effects of any maverick microglia.

The ARUK ODDI comes in to the drug discovery process at the very beginning, armed with scientific knowledge and help from our academic colleagues. Firstly, the ODDI biologists build biological models of Alzheimer’s disease in the lab, such as microglia in a dish, and create ways to test specific properties of the model e.g. a test for the health of microglia. The ODDI chemists design and make experimental drugs, which the biologists add to their biological model and run the test.  There are many rounds of designing, making and testing, and many molecules fall by the wayside, but frontrunners emerge that have the desired effect, e.g. improving microglial health in a dish. Having shown that the approach is likely to succeed, we will then hand the small molecules to pharmaceutical companies, who continue refinement and testing to turn the small molecules into drugs. Only the best small molecules will undergo safety testing and undergo clinical trials with patients.

Through the focussed efforts of scientists here at the University of Oxford, the pace of research is accelerating towards effective treatments for Alzheimer’s. These much-needed treatments will vastly improve the lives of people affected by dementia and their loved ones.