It took over a billion years for life to transition from simple eukaryotic cells, like primitive algae, to simple animals like sponges or jellyfish. But, why did it take such a long time?

First a very brief history of life on Earth.

Life has existed on Earth for at least 3.5 billion years (Ga), and probably formed not long after the Earth’s surface became cool enough to support liquid water. These ancient bacteria like organisms lived in a world of hot oceans under an atmosphere with no oxygen, very different from the world today. For over a billion years the world remained an oxygen free sweltering haven for those bacteria.  By 1.6 billion years ago simple eukaryotes, organisms with complex cells like ours, had appeared. These early eukaryotes appear to do nothing for the next billion years. Not only that but it appears as though the entire Earth system, the environment, chemistry and even tectonics undergo a billion years of stasis and stability. Because of this stability this period in Earth’s history has previously considered relatively uninteresting. At the end of this middle period, around 800 million years ago, during a period of glaciation so severe even the equator froze, the early eukaryotes started to evolve and diversify which rapidly lead to the first animals and eventually us!

But how do we investigate the environments these organisms lived in? We don’t have time travel, but we do have sedimentary rocks, which are the next best thing. 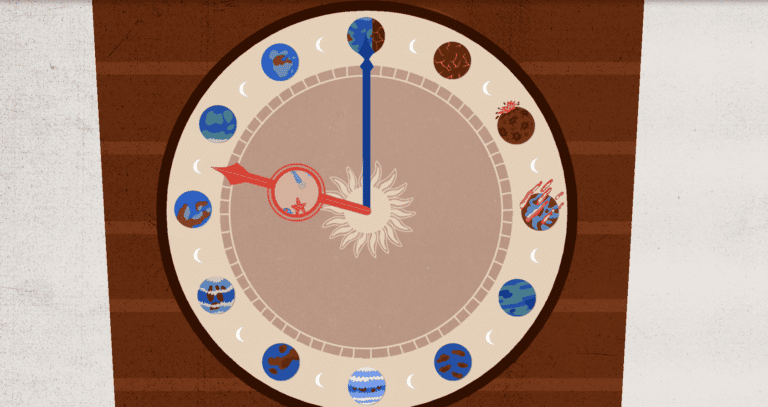 Sedimentary rocks are those that are formed either from tiny particles of eroded rocks, like quartz sand in a desert or at the beach, or from minerals that grow in the environment like, clay or limestone. While these rocks are forming, they record information about the environment that they form in. Limestone, for example, will only form in a certain range of temperatures and with the right water chemistry. “The present is the key to the past” as Hutton famously wrote. We can observe how modern sediments are formed and use that information to understand how ancient sedimentary rocks are formed. If we find a limestone that forms reefs in the side of a mountain, then we can reasonably say that the mountain was once at the bottom of a warm shallow sea, exactly where limestone reefs form today.

Unfortunately, it’s not as simple as it first seems. As a sediment is buried and turned to rock, it undergoes a series of chemical reactions which can sometimes alter any original environmental information. Additionally, the movement of Earth’s tectonic plates can metamorphose sediments beyond recognition by crushing and heating them. There are a few special places though, where extremely ancient rocks have survived relatively unscathed, such as Australia.

Australia was one of the first modern continents to form, at its core are several chunks of the original proto continents, known as cratons. These cratons have already been deformed and cooked as far as they can be, so any sediments deposited on top of them there are relatively safe from the worst tectonic mangling. Near Darwin in the far north of Australia, is a 10km thick pile of rocks that have been so well preserved that they still contain their original environmental and biological signatures fully intact. In fact these rocks, called the Roper Group, contain the world’s oldest live oil, formed from micro organisms living in the waters of a giant salty lake 1.4 billion years ago. 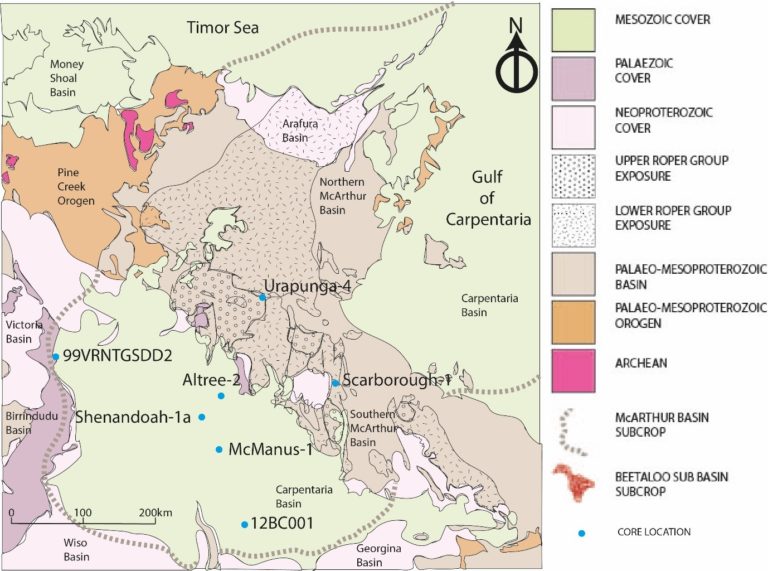 Geological map of the ‘top end’ of northern Australia, pale brown rocks are those examined in this study. Note, they extend under the pale green younger rocks

Understanding sedimentary rocks starts with very simple technique, simple observation, either in the field or back at the lab, which allows us to place the rock in its correct context. These observations are simple, literally just describing the shapes, colours and textures of the rock and relating them to shapes colours and textures from other well understood sediments. In addition to the naked eye, we use a petrographic microscope which uses polarised light to identify fine scale textures and individual minerals in a slice of rock that has been ground down to the same thickness as a human hair. 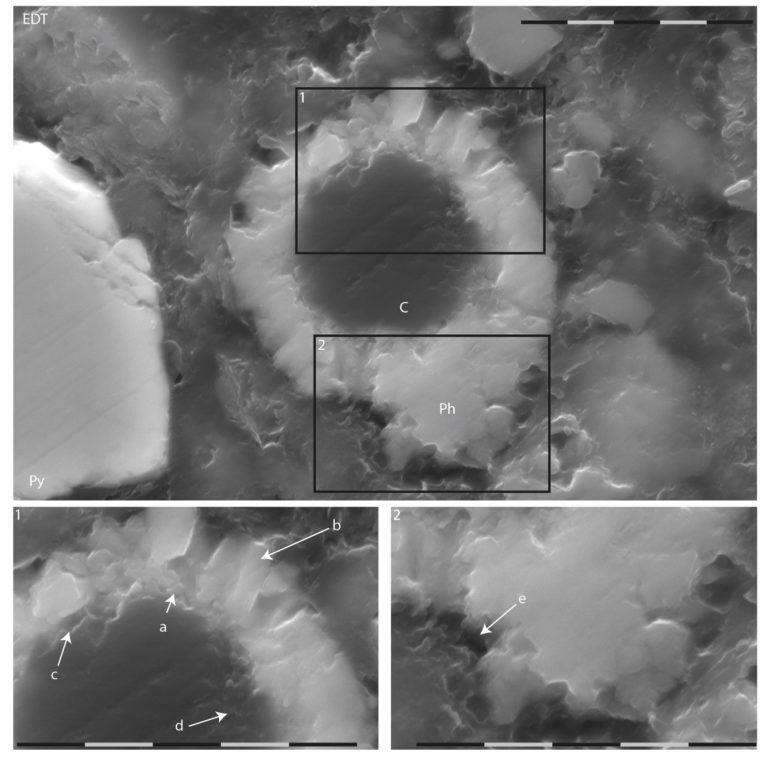 SEM images of a phosphate rich fossil micro organism, the scale bar is 5 microns, about 1/4th the width of a human hair

To imagine even smaller object, we can use a Scanning Electron Microscope (SEM). The SEM allows us to see features the fraction the width of a human hair. The SEM uses electrons, not light, to map the density of different elements in the rock, so as well as forming images, we can inspect which elements that are present and in what relative abundance, this helps us to further determine the mineralogy and chemistry of the rock. Finally, we can combine this information with X-Ray diffraction, a method where electrons are fired at a powdered rock sample to stimulate x-rays, the frequency of which is unique to particular minerals, to fully characterise the mineralogy and chemistry of the rock sample.

By combining simple observations made with the naked eye, with more advanced analytical techniques, we can read the story written in the rocks billions of years ago.