I was born and raised in Accra, the capital of Ghana, to a land valuation officer and a travel-ticketing agent. I have three siblings—a sister and two brothers—all of whom I very much adore.

I completed my basic education at Redeemer Preparatory and Junior High School (also in Accra), where I was a boarder for most of my primary education. Redeemer provided me with a conducive environment to learn and discover a lot about myself — including my love for mathematics and dance! At Redeemer, I also got involved in the Red Cross Society. It was probably during that period that my desire for health-related career paths began to develop.

I completed my secondary education at the Abuakwa State College in the Eastern region of Ghana where I majored in General Science (with Physics, Chemistry, Biology and Elective Mathematics). Like most teenagers in Ghana, I had to travel to another region of the country for secondary school. I loved the growth and maturity I gained from travelling independently and exploring new places away from home. Thanks to the good work of my teachers, I excelled academically and was consequently awarded as the overall best student for the 2011/2012 academic year.

In 2013, having completed my secondary education, I applied to study medicine at the University of Ghana because I thought it would be ‘cool’ to become a doctor. The application process allowed for multiple courses to be chosen, as second and third choices. Well, I was offered a place on the Mathematics course instead, which happened to be my third choice. It was not until the end of my second year in the university that I realised what a good choice I had made in deciding to study Mathematics (with Statistics). After a bit of self-reflection, I found that my apparent interest in becoming a doctor was purely influenced by a societal bias towards medicine as a more ‘prestigious’ field, rather than my own true desires.

While at university, my friend, Sophia, and I founded a non-governmental organization, CIYZOE Eco Group, to educate university students on plastic waste recycling, as there was a clear need for more environmental sustainability practices on campus. The activities of the Group began in one student hostel on campus but has since expanded to all 13 student hostels in the university, after a successful partnership with the university administration and another student group.

I graduated in 2017 with a first class honours degree and was named the best graduating female student in my subject area. After graduation, I worked as a teaching assistant at the Department of Statistics in the University of Ghana, teaching first- and second-year undergraduate students. During that period, I was encouraged by my lecturers to explore opportunities for further study. With the excellent coaching of some mentors, I applied for the Rhodes Scholarship to study for a postgraduate degree at the University of Oxford. I could not contain my joy when I was announced as one of two winners of the inaugural Rhodes Scholarships for West Africa. I remain thankful for the phenomenal support received from my family, friends and mentors during the application and selection process.

I am now a PhD candidate at the University of Oxford, working towards a degree in Statistical Science. My main area of specialisation is in statistical epidemiology and I focus on the application of mathematical models and statistical principles in the study of infectious disease outbreaks. My PhD is being supervised by Professor Christl Donnelly.

I am a member of St Peter’s College and I really enjoy being involved in the college community. Aside from research, I serve as Welfare Officer in St Peter’s College (you guessed!) and as Treasurer of the Oxford University Africa Society.

My research on disease outbreak modelling

When an individual becomes infected with a transmittable disease, chances are they may end up spreading the infection to other individuals, sometimes without even knowing they have it!

Diseases may spread through various channels: a few examples are air (e.g. through coughing and sneezing), water and physical contact. When an infectious disease spreads quickly over a given geographical area or among a specific group of people, especially at a rate higher than is typically observed, we say an infectious disease outbreak has occurred. A classic example of an outbreak is the ongoing novel coronavirus outbreak, which has led to more than 4500 cases so far and about 106 deaths, all in less than 2 months!

During an outbreak, public health officials ask many questions, such as: ‘how fast is the disease spreading?’, ‘how many people are likely to get infected?’ and ‘who is at the highest risk of getting infected?’.

One model – known as the ‘branching process’ (see Fig. 2) – was originally used to study the extinction of family names. However, it is now used in several different fields. In my research, I investigate how the model (and variations on it) could be used to describe the dynamics of a population during a disease outbreak.

We can set up mathematical equations to describe this entire process. Then, with these equations, we can understand how an outbreak is likely to progress.

Often, we are interested in the reproduction number, commonly referred to as R0 (pronounced r-nought). Let’s assume that there is a single infectious individual in a community, then R0 gives us an estimate of the average number of people this individual is likely to pass on the disease to. R0 is therefore very important in informing outbreak response. I use principles in statistics to derive R0 and other important quantities such as the infection rate, which measures how many people get infected during a given period of time.

I use two types of data in my research: surveillance data collected during actual outbreaks and ‘artificial’ data generated with the aid of a computer.

To make the models that I develop more realistic, I consider various factors, especially those which may affect how different individuals respond to an infection. One such factor is vaccination. Using these models, I can estimate the level of vaccination required to halt or slow down the spread of an infectious disease. This information is particularly useful in the planning of vaccination programs.

My research is highly relevant to the promotion of public health and wellbeing. When individuals and governments have a clearer understanding of the factors which influence the spread of infectious diseases, they will be in a better position to take the best actions to prevent and control outbreaks. Consequently, more people will be protected against infectious diseases and more lives will be saved. 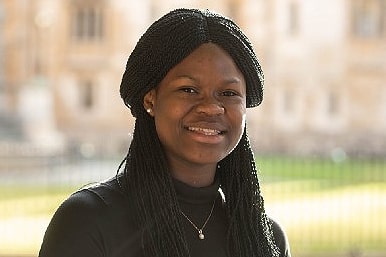