Whether it’s the way we speak, or the sports team we support, the little differences between us can carry clues to our origins.

But scientists are searching for other, more fundamental clues to our ancestry, hidden within our DNA.

What is genetic variation?

The human genome is made up of around 3 billion chemical units called nucleotide bases.  There are only four types of bases – A (adenine), G (guanine), C (cytosine) and T (thymine) – but together, the long sequences of ‘letters’ called chromosomes form the building blocks of our biological makeup.  Most cells in our body contain two copies of the genome: one inherited from our mother, and the other from our father. Although nearly all of this sequence is identical whenever we compare two chromosomes from people from anywhere in the world, occasionally there are differences. This is what we call ‘genetic variation’.  Commonly occurring variation – where the rarer type is found in at least 1% of chromosomes, and with just a single nucleotide base change – covers only about 0.5% of the genome!  But because the genome is very long, this still adds up to 15 million places with common variation.  Scientists have developed technology to find out which two types of bases an individual has inherited from their two parents, at these places. 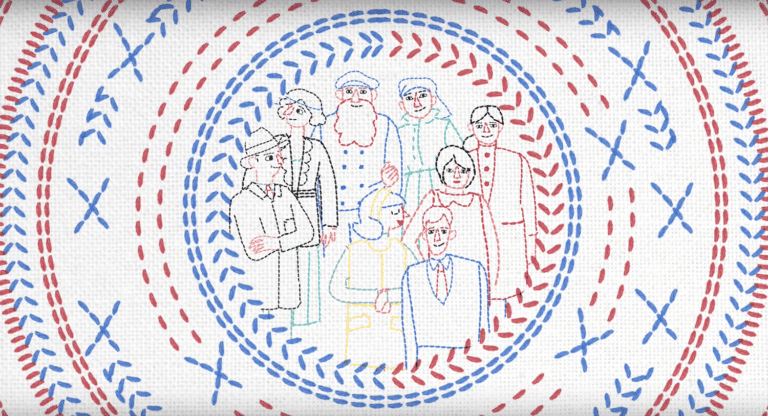 How do we inherit DNA from our ancestors?

The DNA you inherit from each of your parents is actually a mosaic.  That is, your mother’s chromosomes were not passed on to you in complete units.  Instead, they are randomly chopped up into long chunks, and precisely reassembled as a mosaic of your maternal grandparents’ DNA, before being passed on to you. The same happens with the DNA from your father.  This process is called ‘recombination’.  As we look back in time, this means that although the number of our ancestors grows, the length of the chunks of DNA that we receive from each of them gets smaller and smaller.  And often we inherit no DNA directly from an ancient enough ancestor!

Now imagine a chunk of DNA in your genome, and trace the direct line back through all your ancestors who passed down that piece of DNA. If we did this for another person, eventually we would reach an ancestor that was common to both of you. Because of recombination, the identity of this “common ancestor” is different for different parts of the genome. If you compare your DNA to your cousin, for example, in some bits of the genome you will have both inherited the same chunk of DNA from your common grandmother, but in other places your common ancestor would have lived much further back in the past.

How can genetic variation tell us about shared ancestors?

Occasionally, a genetic mutation occurs when a child inherits DNA from its parents. This mutation is then only inherited by the child’s own descendants. This is why the same bit of the genome can have different types (alleles) in different people.

Now imagine the same bit of the genome in two different people. The further back in the past you have to go to find a common ancestor, the greater the chances that a mutation has occurred somewhere within the line of ancestors, and was only passed on to one of you. This means that the more similar a chunk of DNA is between two people, the more recently they must share a common ancestor. Not only that, but because of recombination, the more recent the common ancestor is, the longer the commonly-inherited chunk is. Scientists can therefore use the information in differences in the genetic code between people to infer information about patterns of ancestry sharing between them.

What can ancestry sharing tell us about population history?

If people tend to have children with other people from a localised region over many generations, then their descendants will share ancestors more recently with each other than with people from elsewhere. And therefore, the patterns of variation in their genetic code will be more similar. For a while now, scientists have known that this phenomenon exists on a global scale, although the effects are quite subtle. For example, two ethnically Chinese people have a slightly more similar genetic code than between a Chinese and a European person.

Until recently, it was not known if these localisation effects existed on much smaller scales, such as within countries. By comparing the genetic code of people from all over the British Isles, and inferring the patterns of ancestry sharing among them, scientists in Oxford have found such effects down to county-level scales. In other words, ancestry sharing among individuals can be mapped to different parts of the British Isles, and different regions show differing amounts of localisation. People from Orkney, Wales, and the south west tip of England can be more strongly differentiated from other regions, whereas people from the east of England are indistinguishable over a much larger area.

Ancestry sharing can also tell us about historical mixing of two previously-isolated populations, and when this might have occurred. This is because chunks of DNA inherited from each population break down over time through recombination, in a way that is informative of the time since the first mixing occurred – like a genetic clock. By looking at the patterns of ancestry sharing between people from the British Isles and people from continental Europe, scientists have found Norwegian-like DNA in people from the Orkney Islands. They estimate that it contributes to about 25% of their DNA and date the mixing to 1100 CE (with 95% confidence in the interval 830CE to 1418CE). Norse Vikings are known to have first arrived in the Islands in the 800s.

For the even more curious.

Patterns of variable ancestry sharing such as those seen in the British Isles don’t necessarily have to be associated with geographic regions. All that is required is for a certain group of people to tend to have children together more often. Therefore, cultural characteristics such as religion, or language spoken, can potentially have the same effect on our genetics as geography.

Find out more about the exhibition Settlers: Genetics, Geography and the Peopling of Britain