Can we make a sensor that can match a sniffer dog?

When it comes to sensing potentially-dangerous vapours, sniffer dogs are still considered the gold standard. In this animation we learn about chemiresistive sensors, a new type of sensor that may be able to match the noses of our furry friends.

We see sensors and detectors around us every day. Vapour sensors are used to detect vapours and gasses in the air and are used for a large range of safety, security, and healthcare applications, including airport security, humanitarian de-mining, and the detection of health markers. It is perhaps surprising that sniffer dogs are still the gold standard, despite advances in modern technologies. However, it is not possible to use sniffer dogs for every sensor application and many of the existing technological solutions, such as the ones you see at airports, require large pieces of equipment.

That’s why our research focusses on the development of a type of vapour sensor that is very sensitive, small, and easy to use. 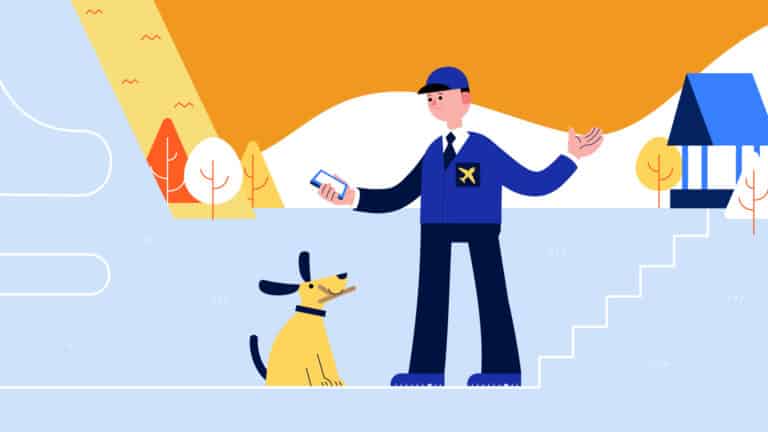 The sensing material has to be a something that conducts electricity and interacts with the vapour molecules that we want to detect in such a way that it changes the resistance of the sensing layer. Also, because we want to develop very small sensors the sensing material has to be small-scale. One group of materials that is especially interesting are conductive polymers. Polymers are organic compounds, such as plastics, that consist of the same building block repeated many times. Conductive polymers are a special type of polymer that conducts electricity.

Traditional conductive polymer-based sensors use a thin film of conductive polymer. However, we have shown that we can significantly improve the sensitivity of such a sensor by using a percolation network instead of a thin film (Figure 1 – Right). To do so, we make use of the percolation effect. The percolation effect describes the movement of fluids through the available pathways in a porous medium, such as water filtering through coffee grounds. In the case of our sensors the percolation effect applies to electricity moving through the pathways of the polymer network. This means that if there are no polymer connections in the network there is no conductance between the electrodes (A on the graph below). When more connections are added, there is a sharp increase in conductance when the network bridges the gap between the electrodes (B). When even more connections are added to the network, the conductance starts to level off (C) (Figure 2).

Figure 2: Schematic graph showing the conductance versus the number of connections in a percolation network.

Traditional, thin film based sensors are operated in this flatter part of the curve (C). In this flatter part of the curve the number of connections is so high that they form a continuous thin film instead of a network. In this region a change to the network, caused by interactions with the vapour molecules, causes a small change in the conductance of the network. Our sensor, however, has a network of polymers instead of a thin film. This means that our sensor is operated in the steep part of the percolation curve (B). Small changes to the network caused by interactions with vapour molecules cause a large change in conductance. This means that our sensor is much more sensitive than traditional sensors.  We can now detect quantities as small as 18 parts per billion (ppb). This means that if only 18 out of 1.000.000.000 molecules in the air are the ones we are looking for, we can still detect them! That is the equivalent of finding 18 specific cars in a line of cars that goes around the Earth 100 times!

We can now detect quantities as small as 18 parts per billion. 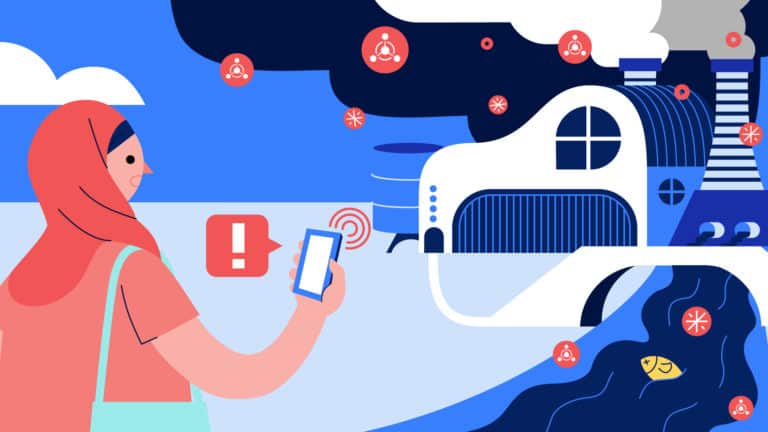 Because the sensors we’ve developed are small (Figure 3), operate at room temperature, and don’t require large power supplies, they can be easily carried around and, for example, send a signal to your mobile phone when something is detected. We are also working on making our sensors on wearable and flexible base structures. This would make it easier to incorporate the sensors into everyday objects, such as clothing, for sensing on the go. 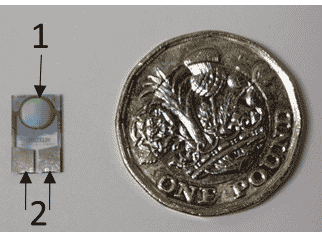