I grew up in Madurai, a small town in the state of Tamil Nadu, Southern India. From my childhood, I was always amazed by nature and intrigued by how some bacteria can be beneficial and some can cause disease in both animals and plants. During secondary school, I was fascinated by biological sciences and enjoyed field trips in and around my town. During one of the field trips, our Biology teacher pulled a plant from the soil and showed us the roots with little finger-like outgrowths (known as ‘nodules’) and told us that this is where good bacteria live and they help these plants to grow.

At that time, I didn’t know that these helpful bacteria are called as rhizobia which only forms nodules on special plants (legumes). I was interested to know how rhizobia help legume plants to grow in poor soil which contains low levels of nitrogen. This interest and curiosity led me to choose Microbiology for my undergraduate studies. After I completed my studies in Microbiology, I got a Felix Scholarship to pursue a PhD in Microbiology, at the University of Reading. I was so excited and fortunate to know that Felix Trust recognised my love for bacteria, paid my university tuition fees and provided me with living expenses during three years of my PhD. My family and friends were also so excited, as I was the first person to do a PhD in a science subject and in a Western country.

During my PhD, I studied how a good bacterium, like Rhizobium leguminosarum (rhizobia) interact with legume plants and help them grow in nitrogen poor soil. Now as a post-doctoral fellow, I work with Professor Philip Poole (who was also my PhD supervisor) in the Department of Plant Sciences, University of Oxford, to understand how rhizobia attach and associate with legume roots, before helping them to gain more nitrogen.

My research on symbiotic bacteria and food security

Due to increasing population and depleting natural resources, food security is a major global concern. To tackle food security, developing and implementing sustainable methods are of high priority. Among others, one area that needs urgent attention, is creating a sustainable method to provide nitrogen for plant growth. Although synthetic nitrogen (fertilizer) enhances crop productivity, its production is a very expensive and environmentally polluting process.

Nitrogen is one of the important plant nutrients essential for making proteins, which are building blocks for plant growth and yield. Soil has very low amounts of nitrogen (usually due to its level of organic matter or compost derived from plant material), however nitrogen is abundant in air, but it is not readily available in a usable form by plants or animals. In nature, a means to overcome this limitation of nitrogen was solved by a group of symbiotic bacteria called “rhizobia”, which have developed an ability to convert nitrogen (N2) present in the air to ammonia (NH3), which can then be used by plants. In doing this they develop a symbiosis with legume plants (such as peas and beans) during which plants construct a small houses or nodules on their roots for the bacteria to live in (the very same structures that I found so fascinating on a field trip!).

This symbiotic interaction is very specific between rhizobia and legume plants and needs a series of “chemical conversations” in which the plants and bacteria release chemicals that the other responds to. First the legume roots initiate the interaction by secreting a specific chemical signal (flavonoids) to attract rhizobia. Rhizobia perceives this chemical signal and synthesis nod factors, which help the rhizobia to make friends with the legume roots. This signals the legume plant to start developing an outgrowth like structures on the roots, called “nodules”. After the initial interaction, rhizobia make several “glue” like proteins, which enable the bacteria to attach to the roots. Once they are attached to the roots, plants let the attached bacteria travel inside the roots, via a molecular tunnel, called as “Infection threads”, which lead rhizobia to the nodules. Nodules contain a perfect condition for the rhizobia grow and convert the atmospheric nitrogen to ammonia.

My research focuses on the first and foremost step, rhizobial attachment to legume roots, using Rhizobium leguminosarum and garden pea as a model system. I use light producing rhizobia to track and monitor attachment and colonisation on pea roots.

Check out these links to find out more: 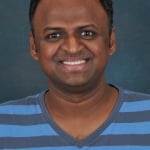