I was born and raised in a family of nine in a tiny village of Amalo in Rift Valley Kenya. I studied in a local primary school called Lelaibei Primary, which had very limited resources (many teachers couldn’t converse in English even though we were supposed to be taught in English, and our national exams were in English). As a result, I graduated with paltry marks, which made getting admitted to a good secondary school almost impossible. With my mother as my strongest advocate, Mercy Girls Secondary School saw great potential in me and offered me a chance.

With the help of the exceptional teachers in the school, I went from not being able to construct a grammatically correct English sentence to graduating at the top of my class, emerging as the best student in the Kipkelion district. I was awarded a scholarship to pursue undergraduate studies in Kenya. The influence from two of my brothers who are engineers, combined with the passion I had developed for maths and physics in school, influenced my decision to delve into engineering.

I attended Jomo Kenyatta University of Agriculture and Technology (JKUAT) to study Mechanical Engineering, and was one of the only nine girls in a class of about 80 students. I kept a resilient spirit and aimed to maximize the myriad of opportunities that laid before me – consciously getting involved in sports and leadership roles in school. In my fourth year of undergraduate studies, I majored in Thermofluids. It was during this time that I realised I had a strong passion for thermofluids. In my five years studying engineering, I earned top awards in sports and academics, and ultimately received a Rhodes Scholarship to pursue a PhD in Engineering Science (Aerospace) at the University of Oxford.

I joined Oxford Thermofluids Intitute as a PhD student in October 2015. My research aims to develop advanced cooling schemes for jet engines and I work in a close collaboration with the Rolls Royce Plc – I’ve received a patent for my work! Alongside my research, I tutor engineering undergraduate students at Oriel College.

I am still passionate about sports. I play football for my college team and I am also an Oxford Blue Athlete for 400 m hurdles and 100 m hurdles.

Having beat the odds and continued climbing the academic ladder from a local primary school in a remote village in Rift Valley Kenya to the world’s best university, I am deeply committed to helping empower girls and women. My mother has remained an icon in my life – challenging me to always go higher and holding my hand when I failed; and therefore I understand how important mentorship is to achieving success. I co-founded an organisation called ILUU, headquartered in Nairobi which mentors, inspires and empowers girls from the rural parts of Kenya. In July 2018, I was named one of the UK’s Top 10 Rare Rising Stars.

My research on jet engines

A jet engine is used to power aircraft. Jet engines run at very high temperatures and thus require continuous cooling to avoid melting of their vital components. My research looks at advanced cooling schemes that have a great potential to not only deliver better cooling to a jet engine but also reduce the amount of air spent on cooling; consequently, improving the engine efficiency and reducing harmful carbon dioxide emissions. I develop computer models and then analyse them using flow simulation software. I then compare the computer simulations with the results from the experiments to find out which design delivers better cooling.

As the gases make their way out of the engine via the nozzle, they hit turbine blades causing them to rotate. This creates mechanical energy that drives the shaft. The rotating shaft provides power to both the compressor and the fan. The nozzle has a decreasing area so that the burnt gases escape through it at a very high speed, thereby creating a forward thrust for the engine according to Newton’s 3rd law of motion (which states that for any action force, there is equal and opposite reaction force). This motion is essentially like that of a balloon when it is filled with air and released; the air in the balloon exits in the opposite direction as the balloon motion.

My research focuses on the turbine section of the engine. This section of the engine operates in a very hot environment where hot gases under high pressure whoosh by every second. In these conditions, the turbine blade material will melt. To avoid this and ensure proper working of the engine, the blades are continuously cooled (both internally and externally). Relatively cold air from the compressor is forced through internal cooling passages. The air then leaves through specifically designed cooling holes machined on the blade to form an insulating blanket layer thereby reducing contact with the hot gases. 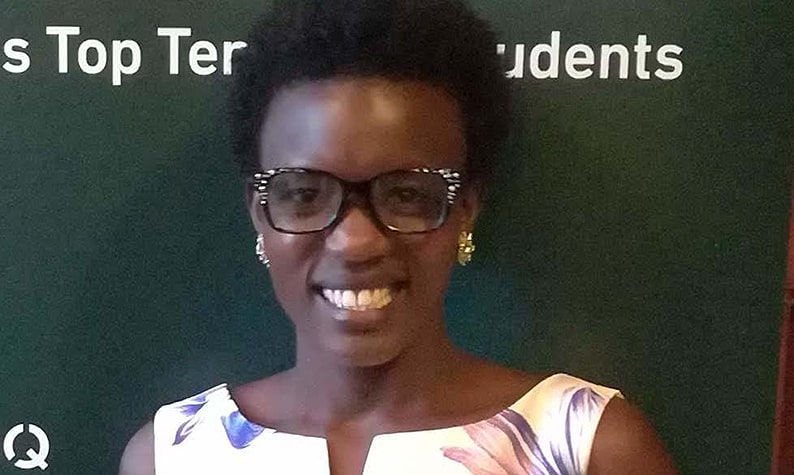