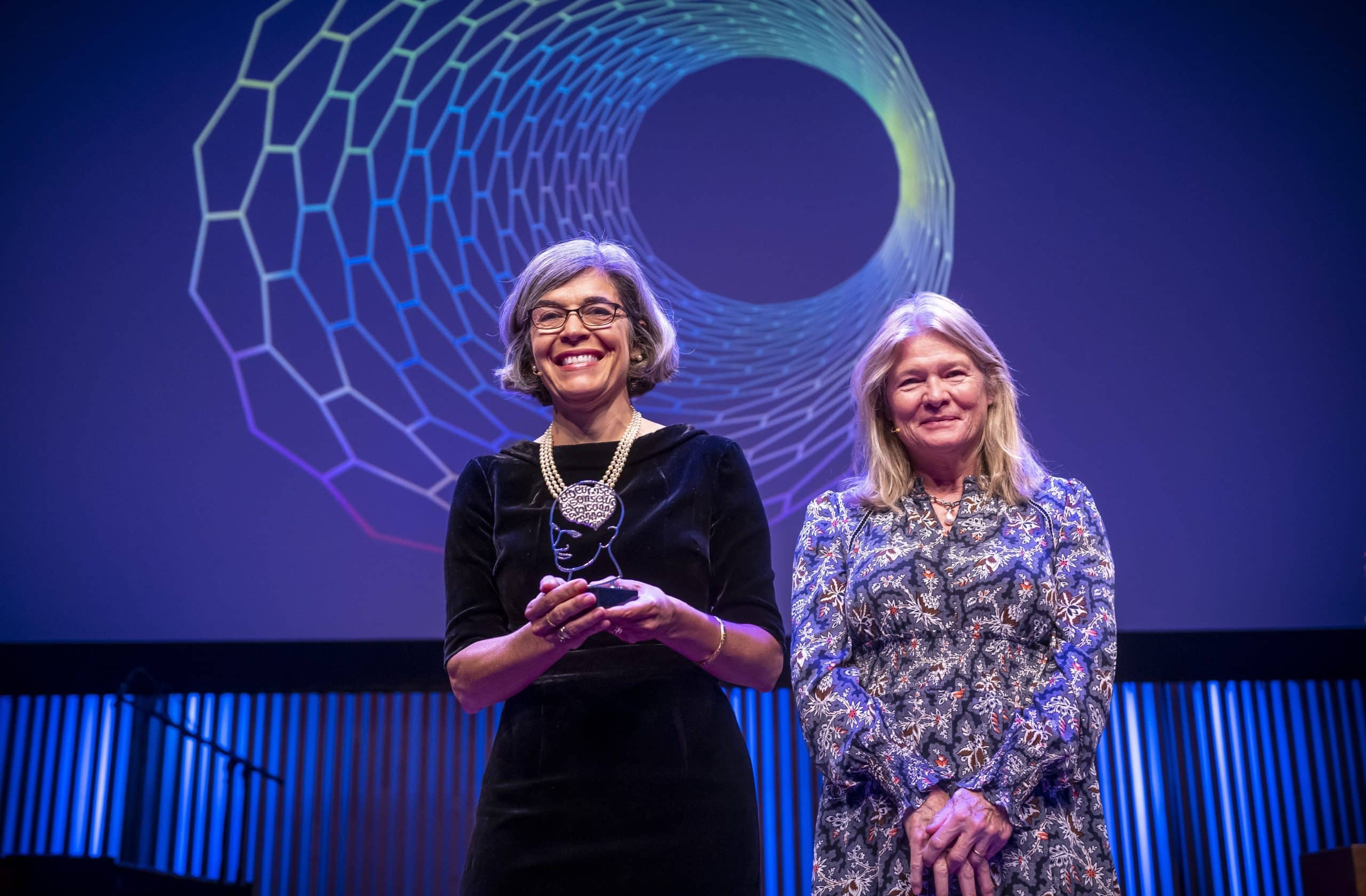 The Heineken Prizes are the Netherlands’ most prestigious international science prizes. Every two years they are awarded by the Royal Netherlands Academy of Arts and Sciences to five distinguished researchers in the fields of Biochemistry and Biophysics, Art, Medicine, History, Environmental Sciences, and Cognitive Science. Professor Nobre received her trophy and prize of 200,000 US Dollars last night at a celebratory event held at the Muziekgebouw aan ‘t IJ concert hall in Amsterdam.

The selection jury was impressed not only by the depth and breadth of Professor Nobre’s research, but also its wider impact. They identified her as a pioneering and distinguished researcher who helped to realise the transition from cognitive psychology to cognitive neuroscience. Professor Nobre was among the first to use several revolutionary techniques to image the brain. For example, early in her career she measured brain activity via electrodes in the brains of epilepsy patients who had had these electrodes implanted. This led to the discovery of new areas of the brain that play a role in processing words, a major breakthrough in understanding the language network in the human brain.

The jury also praised her commitment to promoting diversity and inclusion, and for her exceptional mentoring and leadership skills, calling her a role model for women in science. Since founding the Brain & Cognition Lab at Oxford University in 1994, she has mentored and supervised nearly 50 doctoral students, over 40 postdoctoral fellows and countless (>100) BSc and MSc students. Last year, this was recognised by the Association for Psychological Science who awarded Professor Nobre a lifetime achievement Mentor Award.

I’m deeply humbled and over the moon to receive the Heineken Prize for Cognitive Neuroscience. I feel beyond lucky to be at the confluence of so many inspirations, influences, perspectives, ideas, methodological know-how, and empirical investigations of so many talented and generous people. Thank you to my wonderful mentors, students, research fellows, and colleagues. And also to my husband Luciano Floridi for his boundless love and support, there simply are no words.

Professor Nobre studies how our brains combine signals from our environment and our memory to shape experiences and direct perception, attention, language, and behaviour. Among other things, she focuses on how our brain can concentrate on the most important signals from the environment and the relevant items in our short-term memory. Her research group generates innovative insights by combining behavioural methods (such as eye tracking and virtual reality) with non-invasive techniques to image and stimulate the human brain (including magneto- and electroencephalography, magnetic resonance imaging, and brain stimulation).

Professor Nobre’s work has played a major role in developing our understanding of how the brain’s attentional control network is structured. This includes the discovery that the brain can make predictions about the timing of relevant events, and that these predictions determine where we focus our attention (therefore influencing our perception). In addition to revealing the basic processes underlying these dynamic regulatory mechanisms, Professor Nobre is also investigating how they develop over our lifespans and how they are disrupted in psychiatric and neurodegenerative disorders.

About her research, Professor Nobre said: ‘The magic between mind and brain was what sparked my scientific curiosity. My younger brother had severe cerebral palsy. I spent hours wondering what his mental world was like, and how a brain could come to shape that. In a sense, I am still wondering.’

The Heineken Prizes were instituted in 1964 by Alfred H. Heineken in honour of his father Dr Henry P. Heineken. Previous Oxford University recipients include Sir Richard Peto, Emeritus Professor of Medical Statistics and Epidemiology, who was awarded the Dr A.H. Heineken Prize for Medicine 2008 for his pioneering work in the field of clinical epidemiology.

Find out more: Watch or read an interview with Professor Nobre about her research.