Oxford University to support deep-sea expedition to the Maldives

Taking place between 4 September and 7 October, the Nekton Maldives Mission will deploy two of the most advanced human-occupied submersibles, robotic and autonomous systems, and more than a dozen research technologies. This will make it one of the most technically varied and advanced missions ever undertaken in the Indian Ocean.

Dr Professor Lucy Woodall, Associate Professor of Marine Biology at the University of Oxford and Principal Scientist at Nekton, will lead the international science team. This will draw on her expertise in co-developing marine research expeditions to understand the patterns of biological life in deeper waters and the consequences of human activities on them.

Associate Professor Woodall, said: “This is a very exciting partnership between academic institutions, research foundations and Governments. Collaborations like this allow us to design expeditions around the needs of a country, and gather the necessary information for them to make the important decisions around conservation and marine protection. Deep-sea research is an area of science we have barely scratched the surface of. This expedition will allow us to develop themes of important research priorities, by capturing information such environmental parameters and benthic mapping, for the very first time in this area of the world.”

Coordinated and managed by Nekton, a not-for-profit research institute based at Begbroke Science Park in Oxford, the expedition is a truly international endeavour, involving a global alliance of 40 organisations with a scientific team drawn from the Maldives, UK, Seychelles, India, Sri Lanka, South Africa, Spain, Greece, Netherlands, and Ireland. Ten Maldivian marine scientists have been selected to be the first Maldivian aquanauts to lead over 30 descents in the mission’s high-tech submersibles, with the first descent of the mission to be led by an all-women team. The Maldivian aquanauts are to be announced at a press conference in Male on 1st September.

Other researchers from Oxford University supporting the mission include:

Dr Paris Stefanoudis, a Marine Biologist at Oxford University and Senior Postdoctoral Researcher at Nekton, researches deep-sea and fish community structure and connectivity across depth in tropical coral reef ecosystems. He will lead the visual survey and analysis for the Nekton Maldives Mission.

Professor Alex Rogers will contribute to the field research and support with analysis and publications. His research focuses on applying molecular tools and traditional taxonomy methods to study the evolution of marine organisms, including the impact of environmental factors on the genetic structure of populations. Professor Rogers is also a founding trustee of Nekton, and the current Science Director of REV Ocean, who are generously providing the use of their deep diving submersible for the mission.

Oliver Steeds, Mission Director and Chief Executive at Nekton, said: ‘Far from being an example of ‘Parachute science’, where local researchers are side-lined from field studies conducted in their own countries, this entire mission is co-defined and co-delivered with Maldivian partners to meet their national priorities to establish new protected areas across at least 20% of their oceans and to sustainably develop their blue economy.’

Throughout the mission, you can follow the team’s progress on Instagram, Facebook, YouTube, and Twitter. As part of their Submarine Live programme, between 27 – 29 September the team will also give a daily, live educational broadcast from their mothership, feely available to all schools, students and teachers. 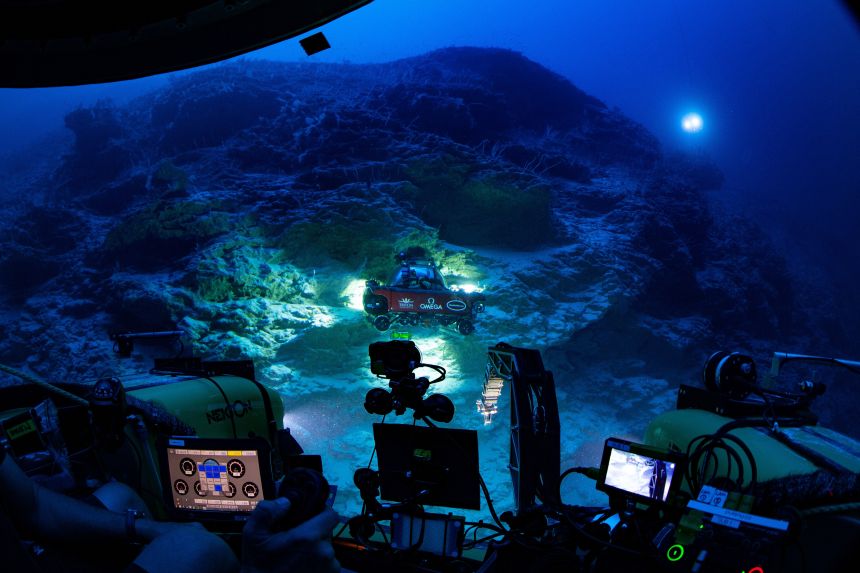 Omega Seamaster 2 Submersible exploring below the waters of Aldabra on 18th March 2019 in Aldabra, Seychelles. Part of Nekton’s First Descent Seychelles Expedition in 2019, which was the first systematic survey below scuba depth in Seychelles. Photo credit: Nekton.