Their calls are based on a new study, recently published in the journal Conservation Letters, led by scientists from the University of Oxford, Nekton (a not-for-profit research institute), and the Western Indian Ocean. This confirms for the first time that deep reef habitats, notably in the Western Indian Ocean, are largely unprotected despite being under threat from a multitude of stressors, including overfishing, pollution, climate change and, in the near future, seabed mining.

Deep reefs (found below 30 m) provide essential ecosystem services for climate change resilience, ocean health, and food security whilst also acting as a refugia for organisms threatened in shallow water, including commercially important species. Despite this, deep reefs are barely protected, even though they have a larger geographic footprint than shallow reef systems. Furthermore, the scarcity of fish in shallow waters combined with modern deep sea fishing technologies is resulting in deep reefs being increasingly exploited by coastal communities who need fish for their food security.

‘We strongly encourage deep reefs to be included in conservation and sustainable management action to complement global targets, notably 30% protection of the global ocean by 2030’ said the study’s lead author, Dr Paris Stefanoudis, a marine biologist at the University of Oxford’s Department of Biology and a Research Scientist at Nekton. ‘Deep reefs are critical to a healthy marine ecosystem and face similar threats from overfishing, pollution, and climate change faced by the much-imperilled shallow reef system.’

Covering over 8% of the global ocean, the Western Indian Ocean is one of the least known, least protected, and most threatened marine regions of our planet. Shallow and deep coral reefs of the Western Indian Ocean are marine biodiversity hotspots with high numbers of species that are found nowhere else on Earth. They are essential to the region’s 100 million people living within 100km of the coastline, including over three million people who are directly dependent on artisanal fishing for their livelihoods. The population is projected to double over the next 30 years, driving greater stressors on the ocean’s biological capacity to support lives and livelihoods.

The scientific team has co-developed a new framework for conserving deep reefs including practical recommendations and specific actions for regional policy-makers, conservationists and scientists.

‘To halt and reverse nature loss, the UN Biodiversity Conference, COP15 must prioritise the conservation of unique ecosystems such as deep reefs, one of the least protected ecosystems on Earth’ stated co-author Professor Lucy Woodall, Professor of Marine Biology at the University of Oxford, Nekton Principal Scientist, ‘We hope our recommendations and actions will be useful for decision makers in the Western Indian Ocean, be applied within the new Western Indian Ocean regional policy and provide the springboard for deep reefs to become protected across the global ocean.’

The researchers urge policy makers to use the COP15 summit to agree to the following: 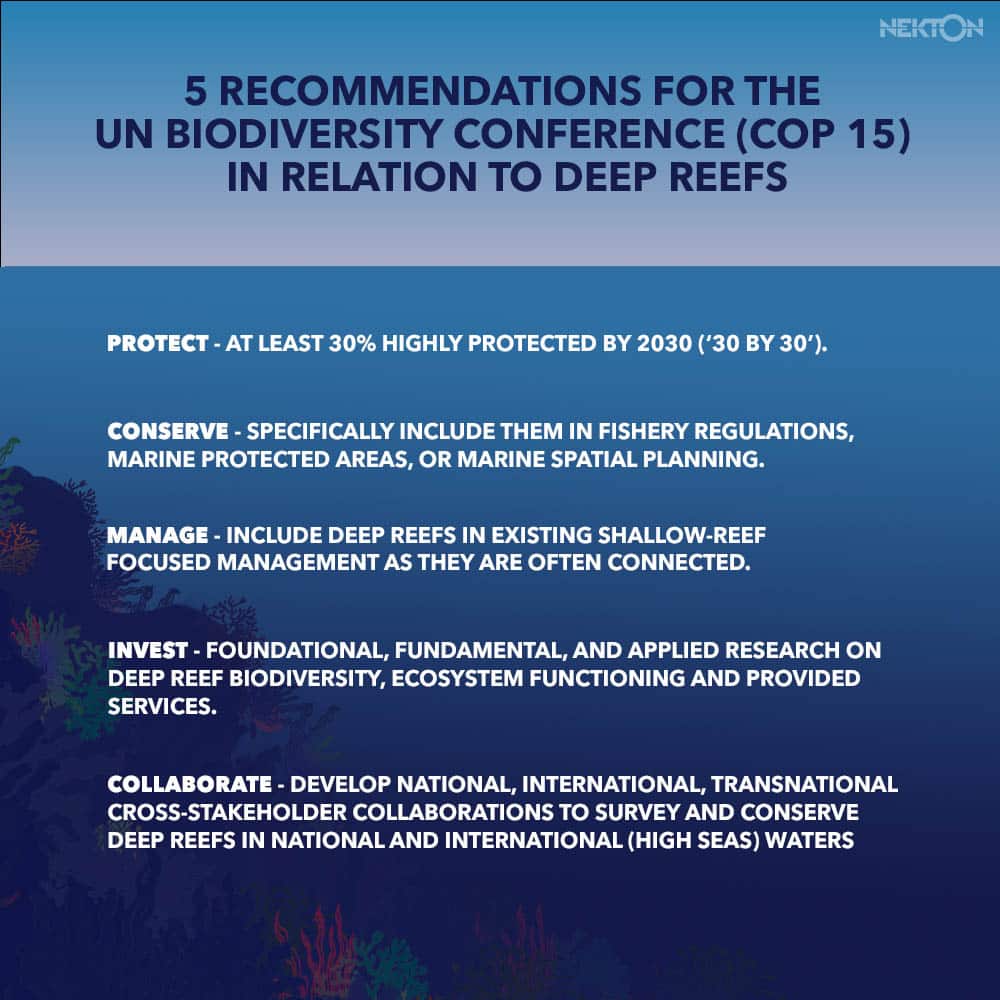 Co-author Athur Tuda, Executive Director of the Western Indian Ocean Marine Science Association, added: ‘To ensure a prosperous and resilient Western Indian Ocean, it is essential that deep reefs are no longer ignored by scientists and policy makers, and they must be specifically considered in conservation and management strategies.’

The study ‘Stakeholder-derived recommendations and actions to support deep-reef conservation in the Western Indian Ocean’ has been published in the journal Conservation Letters.

Nekton works to accelerate the scientific exploration and conservation of the ocean for people and the planet. Nekton is an independent, not-for-profit research institute and is a UK registered charity.