The telescope’s array of highly sensitive instruments was trained on the atmosphere of a “hot Saturn” – a planet about as massive as Saturn orbiting a star some 700 light-years away – known as WASP-39 b. The data were analyzed by an international team involving over 100 scientists from around 50 different institutions.

Among the unprecedented revelations is the first detection in an exoplanet atmosphere of sulfur dioxide, a molecule produced from chemical reactions triggered by high-energy light from the planet’s parent star. On Earth, the protective ozone layer in the upper atmosphere is created in a similar way.

The new readings also reveal signs of active chemistry within the atmosphere. ‘This is the first time we see concrete evidence of photochemistry – chemical reactions initiated by energetic stellar light – on exoplanets,’ said Dr Shang-Min Tsai (Department of Physics, University of Oxford), lead author of the sulfur dioxide analysis. ‘I see this as a really promising outlook for advancing our understanding of exoplanet atmospheres with JWST.’

Webb also saw carbon dioxide at higher resolution, providing twice as much data as reported from its previous observations. Other atmospheric constituents detected by the Webb telescope include carbon monoxide, sodium, potassium, and water vapor, confirming previous space and ground-based telescope observations as well as finding additional water features, at longer wavelengths, that haven’t been seen before. 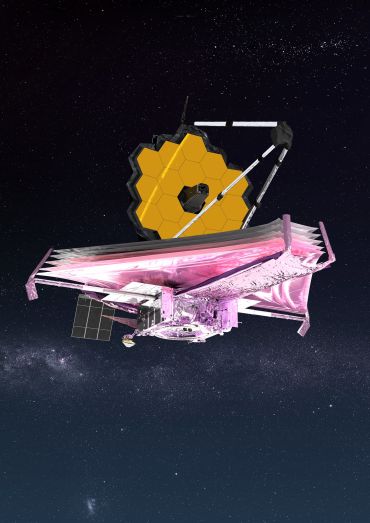 The complete roster of chemical ingredients in an exoplanet atmosphere enables researchers to estimate the abundance of different elements in relation to each other, such as carbon-to-oxygen or potassium-to-oxygen ratios. This will provide insight into how this planet – and perhaps others – formed out of the disk of gas and dust surrounding the parent star in its younger years.

Associate Professor in Physics Vivien Parmentier (Department of Physics, University of Oxford), a co-author on all five studies in the analysis, said: ‘By detecting sulfur dioxide, we have access to sulfur atoms for the first time in an exoplanet atmosphere. Together with the detection of carbon dioxide and water giving us access to carbon atoms, this provides a much more holistic view of what the building blocks of this planet might have been.’

WASP-39 b’s chemical inventory suggests that it was significantly bombarded by large rocky bodies, called planetesimals, which over time enriched its atmosphere in rocky material. The data also indicates that oxygen is much more abundant than carbon in the atmosphere, suggesting that WASP-39 b originally formed far away from the central star.

As part of the very first JWST program, these observations were made immediately public, allowing a very wide community effort involving scientists from all over the world. Contributing author Dr Jake Taylor (Department of Physics) said: ‘Being involved in this community effort that focused on lifting up early career researchers was very refreshing. The open science approach taken has resulted in a culture of transparency and collaboration that we hope will continue into the JWST era.’

The data were captured using JWST’s three instruments that use infrared light to detect chemical fingerprints that can’t be detected in visible light (NIRSpec, NIRCam, and NIRISS). To see light from WASP-39 b, JWST tracked the planet as it passed in front of its star, allowing some of the star’s light to filter through the planet’s atmosphere. Different types of chemicals in the atmosphere absorb different colours of starlight, so the resulting spectrum indicates which molecules are present.

Besides the University of Oxford, the other UK institutions involved in the analysis were the Universities of Bristol, Exeter, Leicester, and Warwick. 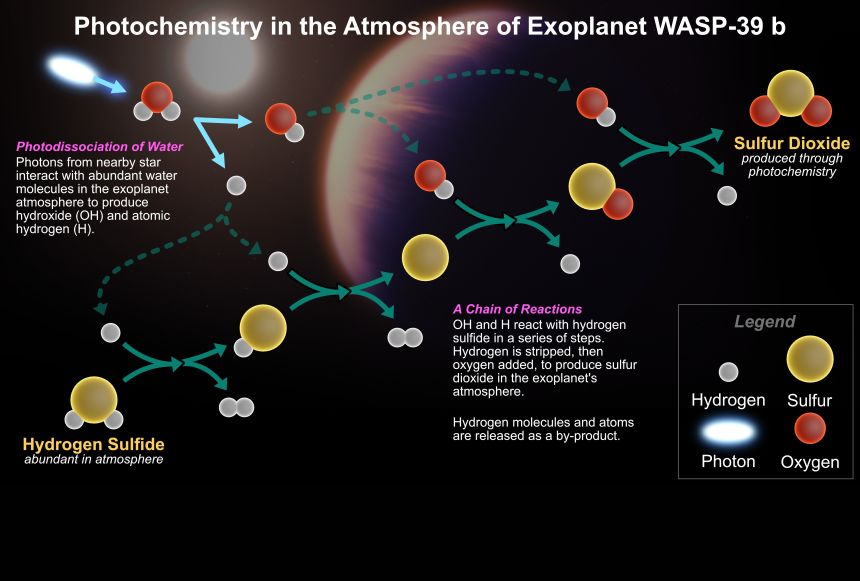 NASA’s James Webb Space Telescope made the first identification of sulfur dioxide in an exoplanet’s atmosphere. Its presence can only be explained by photochemistry – chemical reactions triggered by high-energy particles of starlight. Photochemistry is essential to processes on Earth key to life such as photosynthesis and the generation of our ozone layer. Image credits: NASA/JPL-Caltech/Robert Hurt; Center for Astrophysics-Harvard & Smithsonian/Melissa Weiss