Adjoa Andoh is one of the most distinguished actors of her generation and is currently filming the second series of the Netflix hit Bridgerton, for which she was nominated NAACP Outstanding Supporting Actress in a TV Drama.

Born in Bristol in 1963 to an English mother and Ghanaian father, Adjoa was brought up in Leeds and the Cotswolds. Since the 1980s she has pursued an impressive and varied career on the stage, on television and in film.

Her many television appearances include regular roles in Eastenders, Dr Who and Casualty and series such as Cucumber, Health & Efficiency and Law and Order UK.

Speaking about her new role, Adjoa Andoh said: ‘Sir Cameron has enriched our vision of what is possible in our profession immeasurably. I hope as Visiting Chair in his name to honour his work amongst those Oxford students who wish to make their contributions to the work and the art of storytelling; and to be in dialogue with other theatre makers, ever widening the stories told and the audiences invited in.’

I hope as Visiting Chair in his name to honour his work amongst those Oxford students who wish to make their contributions to the work and the art of storytelling; and to be in dialogue with other theatre makers, ever widening the stories told and the audiences invited in

As well as her TV work, Adjoa is an Associate Artist at the RSC where she was Portia in Julius Caesar, which also played in the West End, New York and Moscow, Ulysses in Troilus & Cressida, and Helen Of Troy in the Odyssey. She has played leading roles at the National including Condoleeza Rice in Stuff Happens and Serafina Pekkala in His Dark Materials and Richard II at the Globe, which she conceived & co-directed.

In film, amongst others she has appeared in Invictus, Fractured, Adulthood, Brotherhood, and I is A Long Memoried Woman.

Sir Cameron Mackintosh said: ‘Since I was lucky enough to have Stephen Sondheim establish the Chair 31 years ago, when he revealed that he was as masterful a teacher as he was a composer and lyricist, I have been honoured that it has attracted so many legendary talents from the world of theatre and film.

‘This year I am particularly delighted to welcome Adjoa Andoh, who is not only known as a brilliant contemporary actress, including her recent dazzling performance in Bridgerton, but also for her cutting edge approach to directing and performing Shakespeare in London which has had a powerful impact on modern theatre.’ 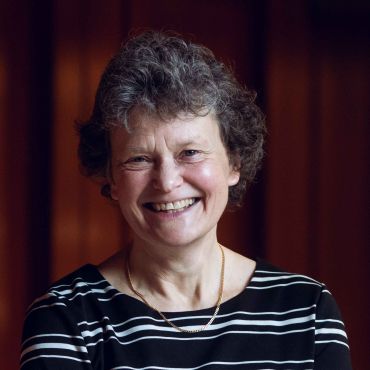 The Master of St Catherine’s College, Professor Kersti Börjars, said: ‘We are delighted that Adjoa Andoh has agreed to take up the Cameron Mackintosh Visiting Professorship of Contemporary Theatre next year.

‘We are excited to be welcoming such a pioneering actor to the Chair. We look forward to welcoming her into the Fellowship at St Catherine’s and seeing her work to enrich students’ engagement with the professional theatre.’

There is no formal teaching requirement attached to the post and the visiting professor has professional freedom to interpret the role. Usually, the post-holder delivers an inaugural lecture at the beginning of their tenure and interacts with students in workshops and seminars throughout the year.