The flooded caldera of Santorini volcano holds many secrets, buried beneath the ash and pumice of its last great eruption. In the Late Bronze Age, about 3600 years ago, an explosive eruption several times larger that of Krakatoa, 1883, wreaked devastation across this thriving island. 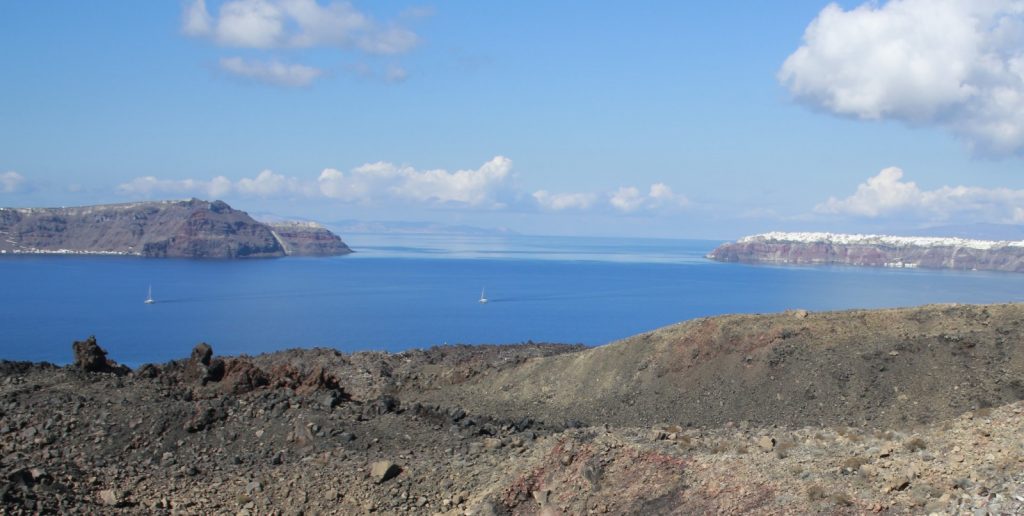 View, looking North, of the northern part of the Santorini caldera. The island of Therasia (left) is separated from the island of Thera (right) by a channel, that is now thought to have formed at the end of the Late Bronze Age eruption.

A great trading port, Akrotiri, was buried under metres of pumice; preserving for future generations a snapshot of Late Cycladic urban life. 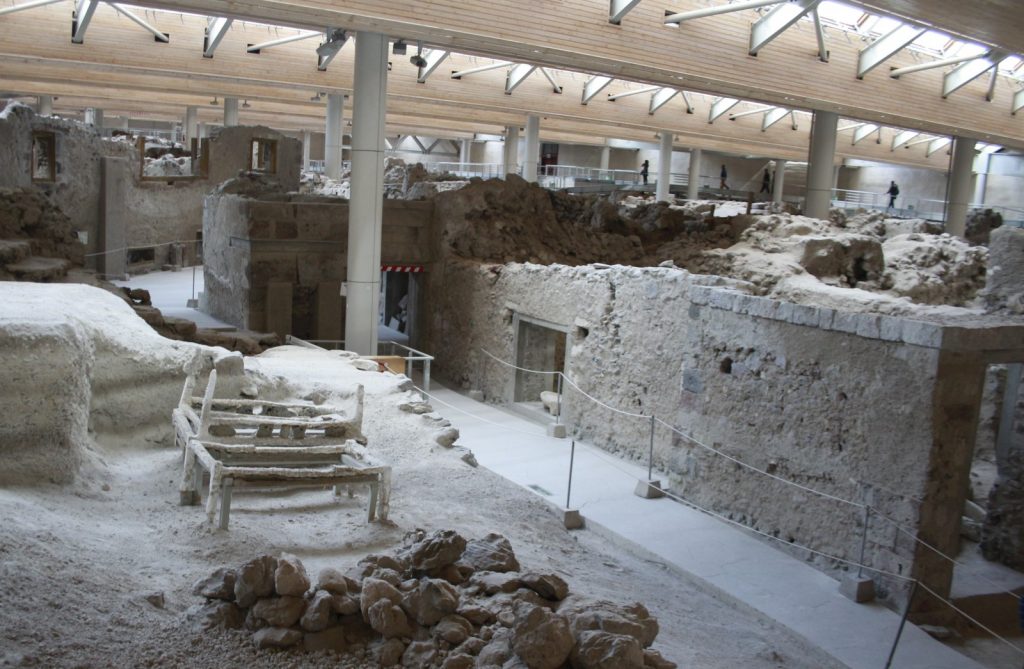 Bronze Age street scene - Akrotiri, Santorini. Precursory earthquakes damaged the town. But there was time for the residents to clear up rubble (foreground), and rescue furniture (those are casts of bed frames in the street), before the town was buried in pumice.

Once the eruption was over and the dust had, literally, settled the geography of Santorini would have looked much like it is today: a group of three islands, forming a ring around a caldera occupied by the sea. The central 'Kameni' islands would not have begun to emerge for another thousand years, or more.

But when did the sea flood the caldera, and what were the consequences? It has long been suspected that the Santorini eruption triggered tsunamis, implicated in Late Bronze Age destruction along exposed coastlines around the Aegean. Observations of the Krakatoa eruption in August 1883 include harrowing accounts of the great sea waves that swept across low-lying areas of Java, Sumatra as this eruption reached a climax. These tsunami were triggered either by the convulsions of the sea-floor, as the island of Rakata collapsed into the newly-forming caldera; or, as now seems more likely, by the displacements of colossal volumes of water as the pyroclastic currents raced into the sea. 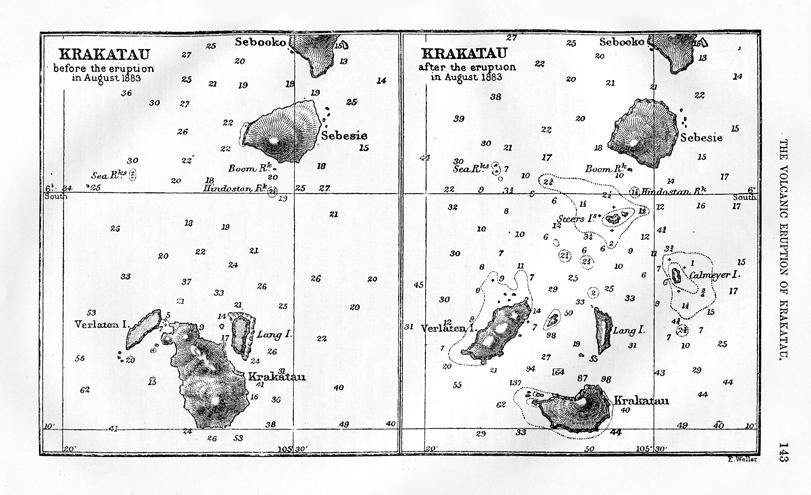 Krakatoa - before and after: notice how much of the island of Rakata (labelled Krakatau) has disappeared in the eruption; and the large shoals of pumice that formed new islands north-west of Krakatau (Proceedings of the Royal Geographical Society).

But could tsunami have been triggered by the Santorini eruption; and how? Until now it has been thought that collapse of the caldera could have triggered a tsunami; but only if the caldera was already flooded by the sea. A growing body of geological and archaeological evidence suggests that the crater of Santorini volcano was not open to the sea, as it is today, at least at the beginning of the Late Bronze Age eruption. Large blocks of stromatolites, an algal concretion, and chicken-wire gypsum that were caught up in the eruption debris point to the presence of a muddy lake in the northern part of Santorini. Before the eruption, this would probably have been an area of hot, bubbling mud-pools, fed by volcanic heat and fluids from depth. Among the wall-paintings from Akrotiri is one, the flotilla fresco, that shows a city on a hill, with a river running by. Are these features that might have been found inside the caldera of the volcano? 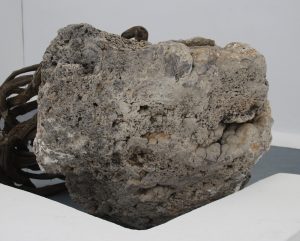 Metre-wide block of stromatolite, thrown out during the LBA eruption, now in the entrance to the Heliotopos hotel.

In a new paper in Nature Communications, we present some new evidence that may help to resolve some of these questions. High-resolution mapping of the seafloor shows the presence of a remarkable scour at the northern end of the deep channel that separates the islands of Therasia and Thera, below the town of Oia. This feature can be seen on older sea-floor maps; but not in such detail. Using sound-waves to look at the structures that this channel cuts through shows that the channel didn’t form until most of the material thrown out in the eruption had already been deposited. The shape of the scour will be familiar to anyone who has built dams of sand on a wet beach, and then let it fail. This shape shows that the channel formed quickly, and that the sea broke through and poured down a great waterfall into the caldera, but only after the eruption was over. Any tsunami waves that formed during the eruption must have been triggered by the entry of the pyroclastic currents into the sea. 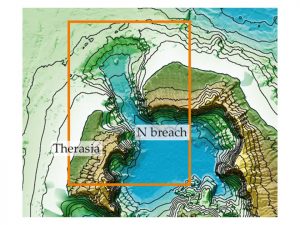 Image of the northern 'breach' in the Santorini caldera, and the scour and channel that cut through it. From Nomikou et al., 2016.

This new evidence, along with new ‘cosmic ray exposure’ age measurements showing that the cliffs of the northern part of Santorini are ancient and formed before the Late Bronze Age, may strengthen arguments that the pre-eruption interior of Santorini island was not filled with seawater as it is today. It doesn’t, however, have any direct connection to the events that led to the collapse of the major Late Cycladic culture on Crete, the Minoan, a few decades later. Disruption caused by the loss of a major trading hub and short-term damage caused by fallout of ash across the islands of the eastern Aegean might well have contributed to the eventual decline and fall of Minoan culture; but the later destruction of the Cretan palaces must have another cause. Earthquake, anyone?

Thanks to NERC for funding for my work on Santorini; the organisers of NEMO 2016 and Heliotopos Conferences for a recent visit to Santorini; to Christos Doumas, Lefteris Zorzos, Clairy Palyvou and Maya Efstathiou for introductions to Akrotiri and the Late Bronze Age, and Floyd McCoy for discussions.

This post was originally posted here:
https://blogs.egu.eu/network/volcanicdegassing/2016/11/08/flooding-the-santorini-caldera/
caldera of Santorini volcano holds many secrets, buried beneath the ash and pumice of its last great eruption. In the Late Bronze Age, about 3600 years ago, an explosive eruption several times larger that of