The first volcanic eruption to be photographed? | www.oxfordsparks.ox.ac.uk
Skip to main content

The first volcanic eruption to be photographed?

In the digital era of instant communication, breaking news of volcanic eruptions usually arrive image-first. This year, spectacular eruptions of Calbuco (Chile), Fuego (Guatemala) and Etna (Italy) have all made it into the end-of-year 'top tens', in glorious multicolour detail. But when was the first photograph taken that captured one instant during a volcanic eruption? And which was the first such photograph to make it into print?

One example may be the April 1872 eruption of Vesuvius, Italy. This short and destructive eruption was one of the most violent paroxysms at Vesuvius during the 19th century. The eruption was quickly documented by Luigi Palmieri - Director of the Vesuvius Observatory from 1852 - 1896. His report of the eruption contains a dramatic line drawing of Vesuvius in eruption on 26th April, which the caption implied was a sketch based on a photograph taken from Naples. 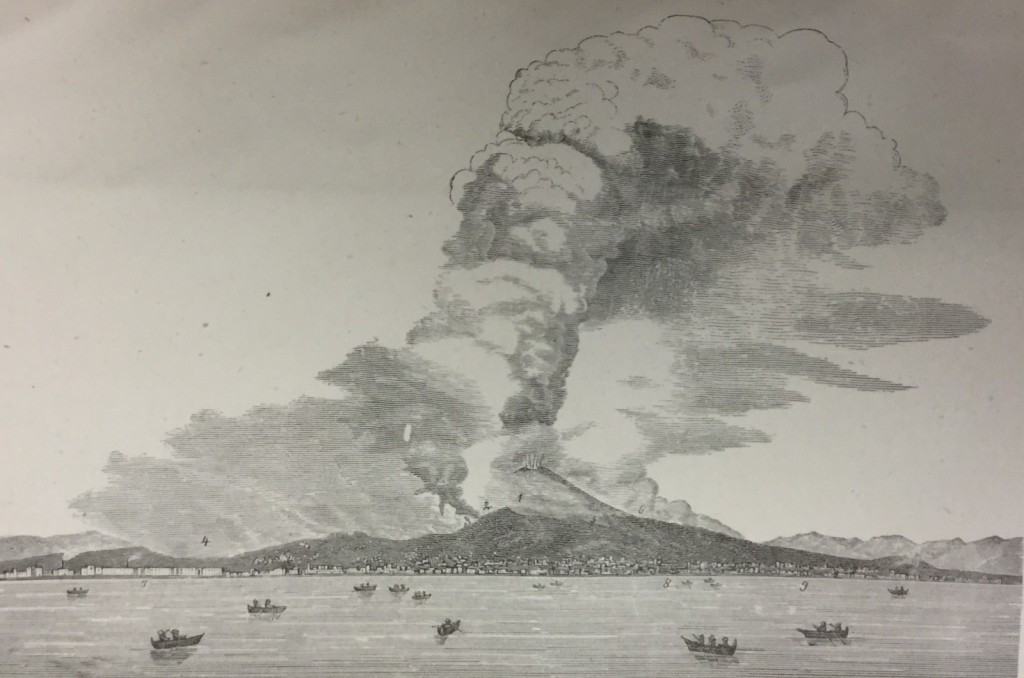 Vesuvius in eruption, April 26, 1872. Original caption 'from a photograph taken in the neighbourhood of Naples''. (Palmieri and Mallet, 1873).

Some years later, John Wesley Judd (1881) noted that 'on the occasion of this outburst [the 1872 eruption], the aid of instantaneous photography was first made available for obtaining a permanent record of the appearances displayed at volcanic eruptions'. Judd published a woodcut of a photograph as Figure 5, with no further details relating to its origin; but the image is clearly of the same event and from a fairly similar location to that depicted by Palmieri. 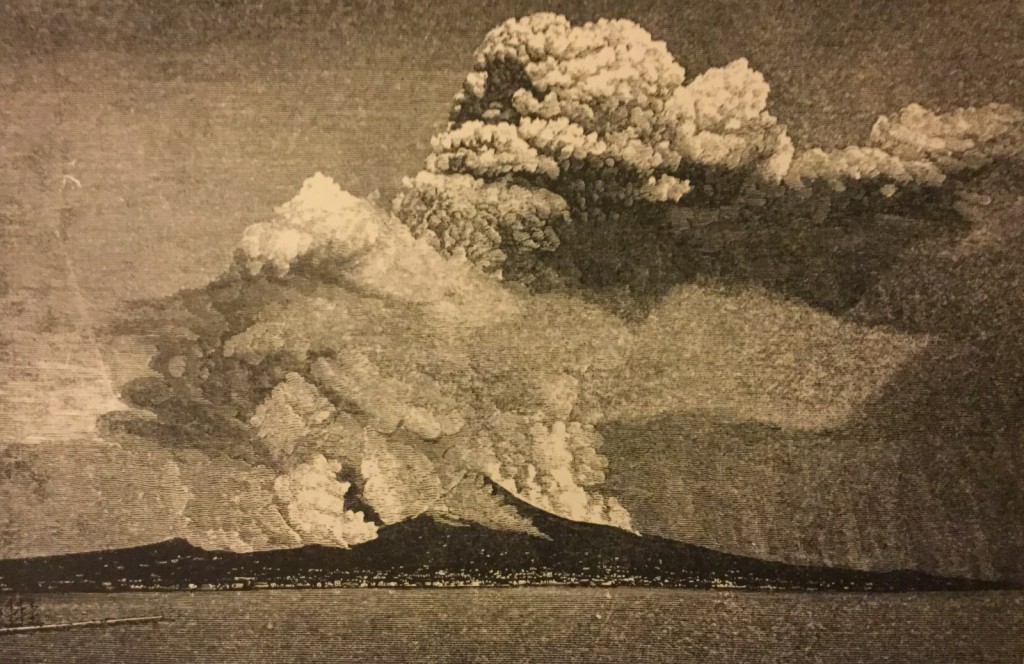 A very similar image - most likely a photograph from the same sequence seems to have later become a 'stock' volcano photograph; appearing as the frontispiece to Edward Hull's 'Volcanoes past and present' (1892), as Plate 1 in Bonney's 'Volcanoes' (1899), and even later as a repainted, colour plate in a popular science magazine (Thomson, 1921). 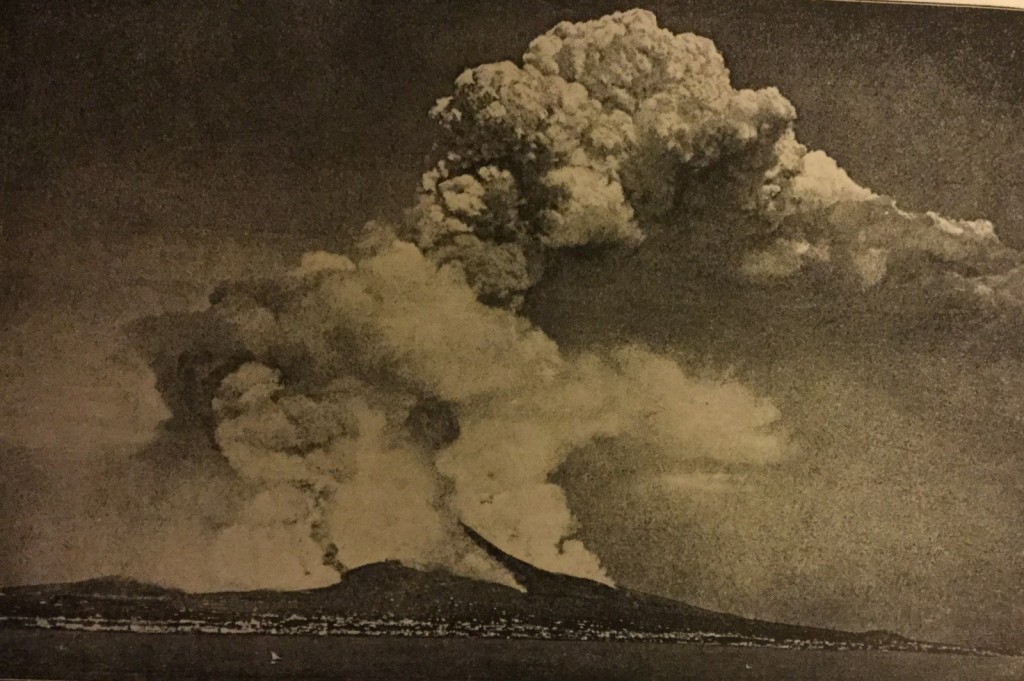 Eruption of Vesuvius, 1872-3. Frontispiece in Hull (1892). Original caption 'From a photograph by Negrettti and Zambra'. 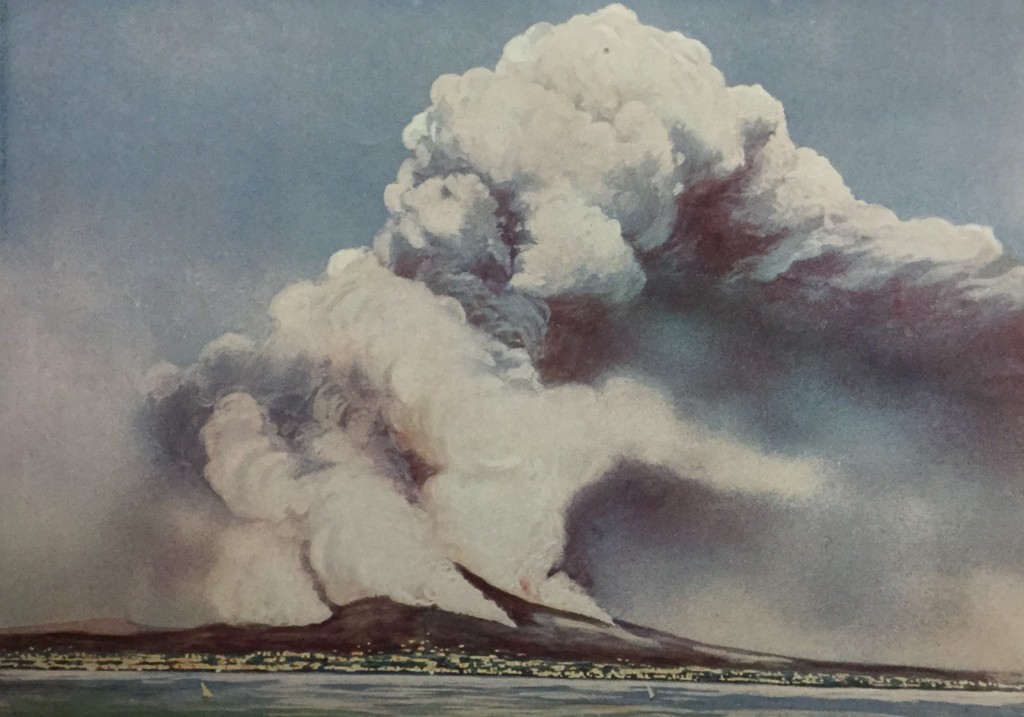 Vesuvius 1872 from 'The outline of science', Thomson (1921). Original caption 'from a photograph by Negretti and Zambra'.

Both Hull and Thomson credited the photograph to 'Negretti and Zambra', a company specialising in optical, photographic and meteorological instruments, and photographic materials - including lantern slides. A plausible candidate for the original photographer could be Giorgio Sommer, who ran a studio in Naples. Some of his collections of photographs of Vesuvius from this eruption can be found in archives including Luminous Lint and elsewhere. As an indication of the wider circulation of these images at the time, another similar image can be found as a glass plate in the archives of Tempest Anderson; a British opthalmologist and inveterate traveller and photographer of volcanoes in the late 19th Century. Anderson's scientific volcano photography included documenting the aftermath of the devastating eruptions of the Soufriere, St Vincent, in 1902, some images of which were published in his 1903 illustrated book 'Volcanic Studies'.

But are these action shots the first 'instantaneous' images of an explosive eruption? A quick search reveals a few albumen prints of steaming volcanoes from the latter parts of the 1860's (including Etna in 1865, by Sommer; Nea Kameni, Santorini, Greece in 1866; and an image of Kilauea that perhaps dates from 1865). There are also other images of the April 1872 eruption, although taken from a rather different and less revealing location. So perhaps Judd was right - or do any readers have any other suggestions?

Judd, JW (1881) Volcanoes: what they are and what they teach. Kegan Paul, London.

The eruptive history of Vesuvius is documented in Scandone et al., 2008, and listed in the Smithsonian Institution Global Volcanism Programme pages.

I am a volcanologist based in Oxford, UK, with an interest in the stories of past eruptions. My blogs tend to focus on volcanoes - contemporary, recent or ancient. There will be quite a lot of 'historical volcanology' in my posts over the next few months, as I am curating an exhibition on volcanoes with Oxford's Bodleian Libraries, which will open in Spring 2017. I am delighted to have joined EGU blogs, and hope that my posts may find some interested readers!

This post was originally posted here:
https://blogs.egu.eu/network/volcanicdegassing/2015/12/15/the-first-volcanic-eruption-to-be-photographed/
Calbuco (Chile), Fuego (Guatemala) and Etna (Italy) have all made it into the end-of-year 'top tens', in glorious multicolour detail." data-share-imageurl="">